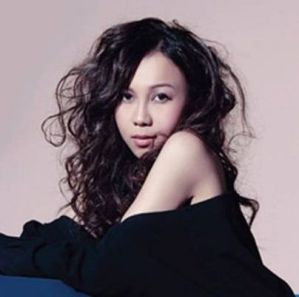 AGA, Agatha Kong, 江海迦 Jiang Hai Jia is a female Hong Kong singer, songwriter. She is signed to Universal Music Hong Kong. AGA made her debut as a singer in 2013 under Universal Music record label.

Awards: Hit Singer-songwriter and Hit song “Superman” in Hit Awards, Best Female New Artist in Cantonese Song Charts.
-Father is Spanish and Chinese mix
-She has two sisters (Catherine and Regina-died of cancer 2015)
-She was an air stewardess for 2 years before she became a songwriter in 2012
- She collaborated with famous singers such as Hacken Lee, Fiona Sit and Shiga Lin